Why Royal Baby #2 is suffering from poor content marketing

We live in a world of high speed trains, electric cars, connected devices, and immediate news from Twitter and Facebook. As of the Q4 2014, Twitter had 288 million active users, while Facebook had 1.39 billion. That would put Facebook users as the largest country in the world, and Twitter users closing in on being larger than the United States. So why no love for the Royal Baby #2? According to some data I put together for Adobe Digital Index (@adobeindex), the Royal Baby #1 was averaging 4x more daily social mentions leading up to the birth than baby #2. 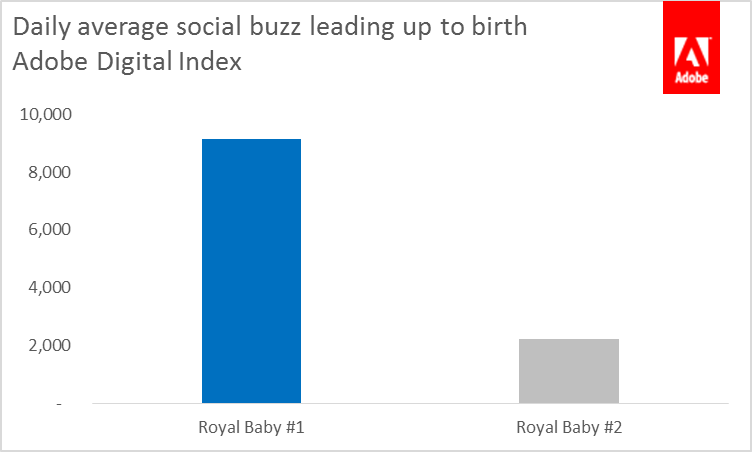 Clearly the Royal Family is running into an age old issue that affects digital marketers on a daily basis. How can I create fresh content that people care about? Here are 4 tips that could make Royal Baby #2 take over in the coming days

1. New spin on an old story

I am sure William and Kate are just as excited about #2 as they were about #1, but the world is clamoring for a new story. Perhaps add in some Quarter over Quarter birth weight stats comparing #1 vs. #2. Or add in a cuteness factor from the 3D ultrasound. These new elements of comparing growth in stats or creating a new stat can definitely help put a spin on old data.

Ask the Brits who they are excited more about. What are they looking for in qualities from the next pint size heir? How often to they check BBC.co.uk for updates on the royal baby? A survey is a great way to drum up excitement and provide some context to data you have created. It also may be  a way to get a viral top 23 list that buzz feed has become famous for.

3. Cut the data in a way that shows the story you want

Sure the mentions count is way down for Baby #2, but maybe if they analyzed the data a bit more they would find that the mentions from outside the U.K. are way up. Maybe they find that their is potential story expansion opportunities in China, or that the highest positive sentiment about #2 is coming from the U.S. Looking at different angles in the data can help to craft the story you want even if some of the angles aren’t the best.

I can attest that I am sure that baby #2 will be loved just as much as baby #1 in the long run. However, if my prediction comes true and the heir to the thrown is determined by Klout score in 20 years, then baby #2 better start thinking about how to utilize these 3 tips to get the edge on his brother.