When I was a kid I used to listen to every Utah Jazz basketball game on the radio. It was a rare treat to be able to go to a game, and the only televised games were usually during the playoffs. Now I am able to see every game through my cable subscription, not just at home but on any device I have on the go.

This past weekend was the fight of a generation. A fight 6 years in the making. Everywhere around the world groups of people got together, spent an hour or more on the phone to order the fight (how can this not be done digitally?), and spent $99.95 for access to the fight and put $300 million into the hands of the two athletes.

In the background, tens of thousands of consumers joined hundreds of free live streams on both Periscope and Meerkat. One tweet I read said, “Anyone who paid for this fight is a shill #periscope”. My  analysis for Adobe Digital Index showed that 40% of the users engaged during the fight were from the United States. Also, Periscope saw a nearly 3x increase in usage, while Meerkat had nearly 2x increase in usage compared to an average day.

Welcome to the newest generation of Napster. 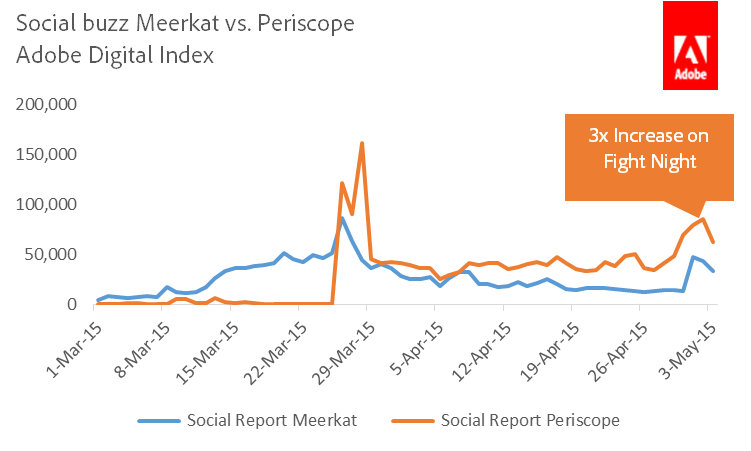 As a high school kid, I loved Napster. It was a great way to steal share music with everyone in the world. Periscope is a similar concept accept the industry being hit now is that of televised content. The boxing match and Game of thrones are the first victims to the newest form of piracy. When combined with chord cutting and DVRs, Periscope provides the last untouched frontier that has kept satellite and cable companies in business…..premium and sports content. Its easy to see the near future where people don’t pay for NFL Sunday Ticket because they can see the game on periscope for free.

I agree that the cable/satellite industry probably needs a change after dominating consumers for over a decade. However, consumers need to recognize that a large portion of the revenue from premium sports content, commercials, a “TV Everywhere” availability on any device goes towards producing new great content and technology that pushes the entertainment industry forward.

In my opinion, an ala carte format similar to slingTV or Verizon’s FiOS offering is on the near horizon for all of the big players like Comcast, DirecTV, and Cox Cable. I support the change that is imminent in the industry.  but not at the price of losing great content. The way things are going, it’s hard not to imagine going back to the days of listening to every Jazz game on the radio, because having it on television doesn’t make financial sense anymore for the franchise.  Let’s hope that the introduction of Periscope pushes the cable industry forwards and not backwards with access to new and live content.