How much does weather affect shopping and other consumer behavior

I recently went to Boston and saw first hand the crazy amounts of snow that they have received in the last few weeks. Coming from Utah, it isn’t a huge shock to see 3 feet of snow on the ground, but to a town that isn’t accustomed to that much snow in one storm, Boston definitely had some struggles.

Winter Storm Juno led to shutdowns of government offices, subways, retail offices, and other businesses. So naturally we can expect that a Winter storm would lower brick and mortar sales, but what about online? Do slower connection speeds, preparing to be snowed in, and other factors decrease online activity? In a report my team just did for Internet Retailer we found that the Winter storm cost eTailers $35 million + in revenue from the Northeast. Does weather affect other consumer behavior?

In unreleased data, I found that Facebook brand engagement was down 20% vs. the average day during the storm days. 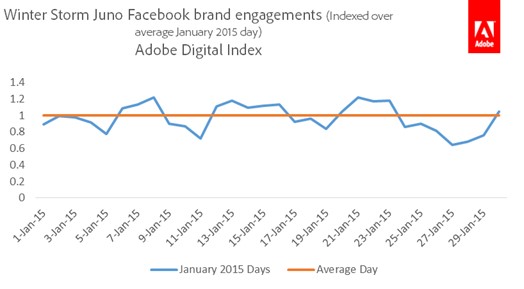 We also found TV Everywhere consumption was down over 5%. This shows the unique view into a consumer in potential crisis. Even deterrents like watching TV on your mobile device, took a hit while people prepared for the worst. It produced a unique marketing opportunity. While I was in Boston cabs, I saw multiple commercials from vacations sites promoting the sunny beaches of Florida. Well played Florida Tourism, well played.