The Key to Winning Fall’s TV Premieres? Get the Star to Tweet Gone are the days of “must see TV” on Thursdays. With digital options and DVRs, consumers, including myself, move to a different drum. From millennials to Gen-Xers we want to consume content when we have the time too and it differes by personality. For Gen X it may be on the comfort on their couch with a cable subscription. Gen Z on an iPad in line at the grocery store, and for hipsters it may just be when they are looking through their Warby Parker order with some Chai tea.

In fact, recent data from Adobe Digital Index shows that on demand authentications happen pretty evenly throughout the week with the majority happening on Wednesday. 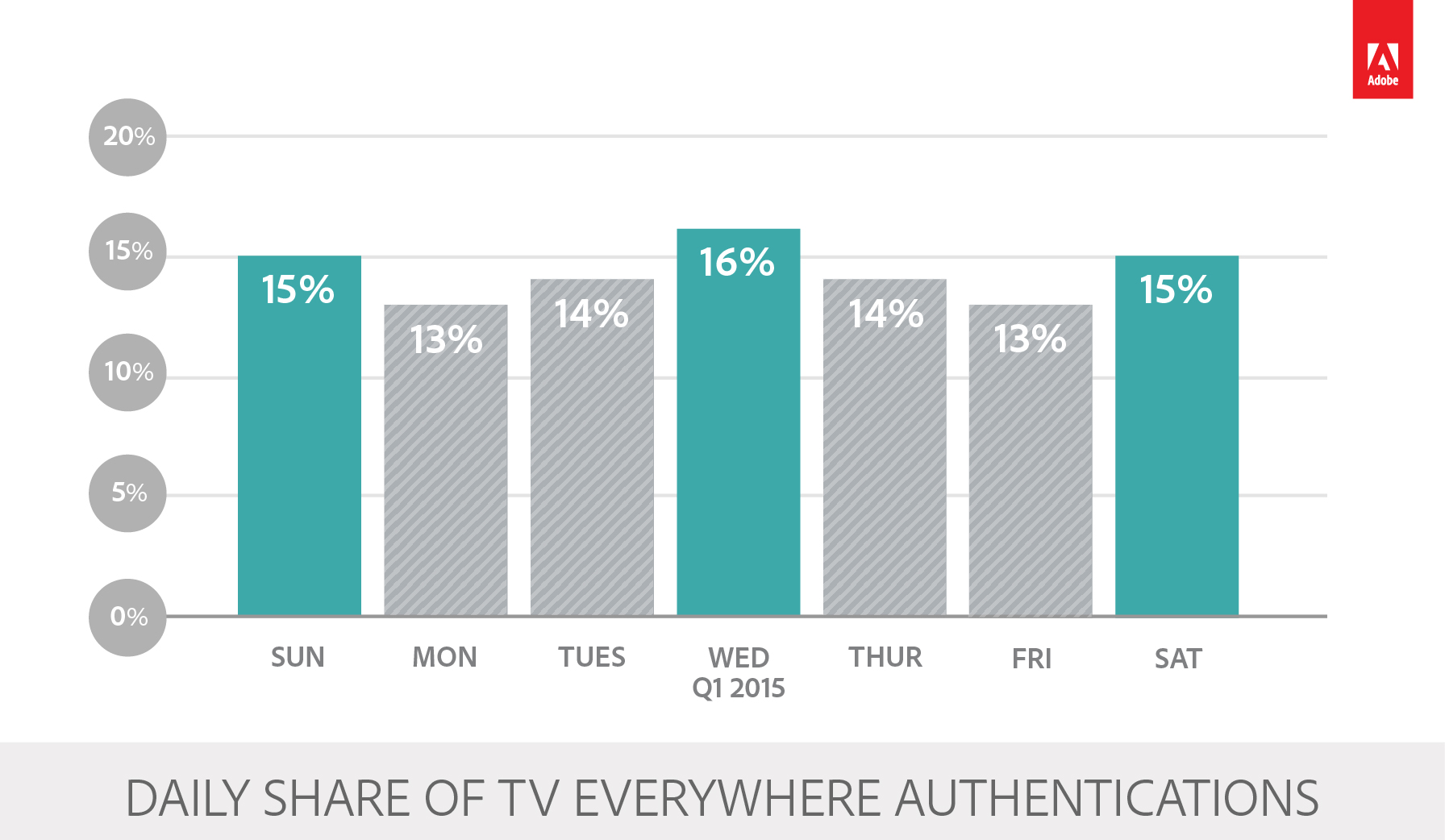 With the changing landscape of digital video and on demand content, it comes as little surprise that having a strong cast for your new fall TV show gives it the best chance for success at becoming a hit. From my latest analysis for Adobe Digital Index, I used Adobe Social to track and analyze more than 20 million engagements (mentions, page likes, and followers) captured from blogs, Facebook, G+, Reddit, Twitter, Dailymotion, Flickr, Instagram, Tumblr, VK, Disqus, Foursquare, Metacafe, WordPress, and YouTube to see the effect that fan following had on social buzz leading up to a premiere.

The key is that getting the star isn’t enough, that star also has to be actively promoting your show. For example, when comparing average buzz for the 20 new shows being released by major broadcasters Fox, ABC, NBC, and CBS the shows with active lead actor or actress promotion have 500% more mentions on average than those who don’t. 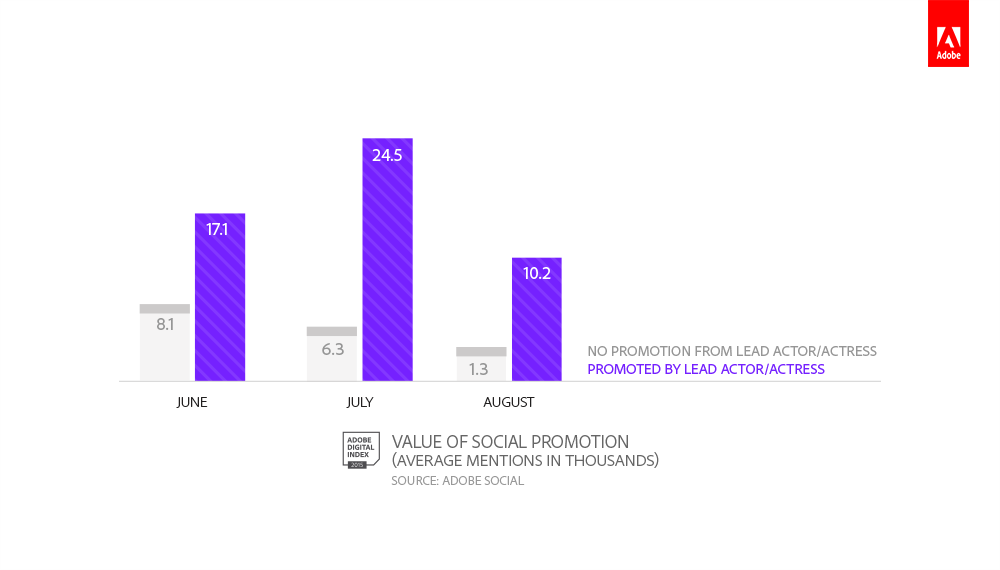 An example is Neal Patrick Harris has 14 million Twitter followers, making him one of the most-followed actors in Hollywood. Harris is the host of reality show “Best Time Ever,” but he didn’t really activate his fan base until recently. That has led to only about 4,000 mentions on social networks this summer.

Comparatively, Priyanka Chopra, one of the highest-paid actresses in Bollywood, has about 26 million social-media followers between Twitter and Facebook and has worked hard to promote her U.S. TV show, “Quantico.” She’s sending out tweets and posts about ‘Quantico’ daily,” Quantico has 76,000 summer mentions, which is five times the average show promoted by its lead. 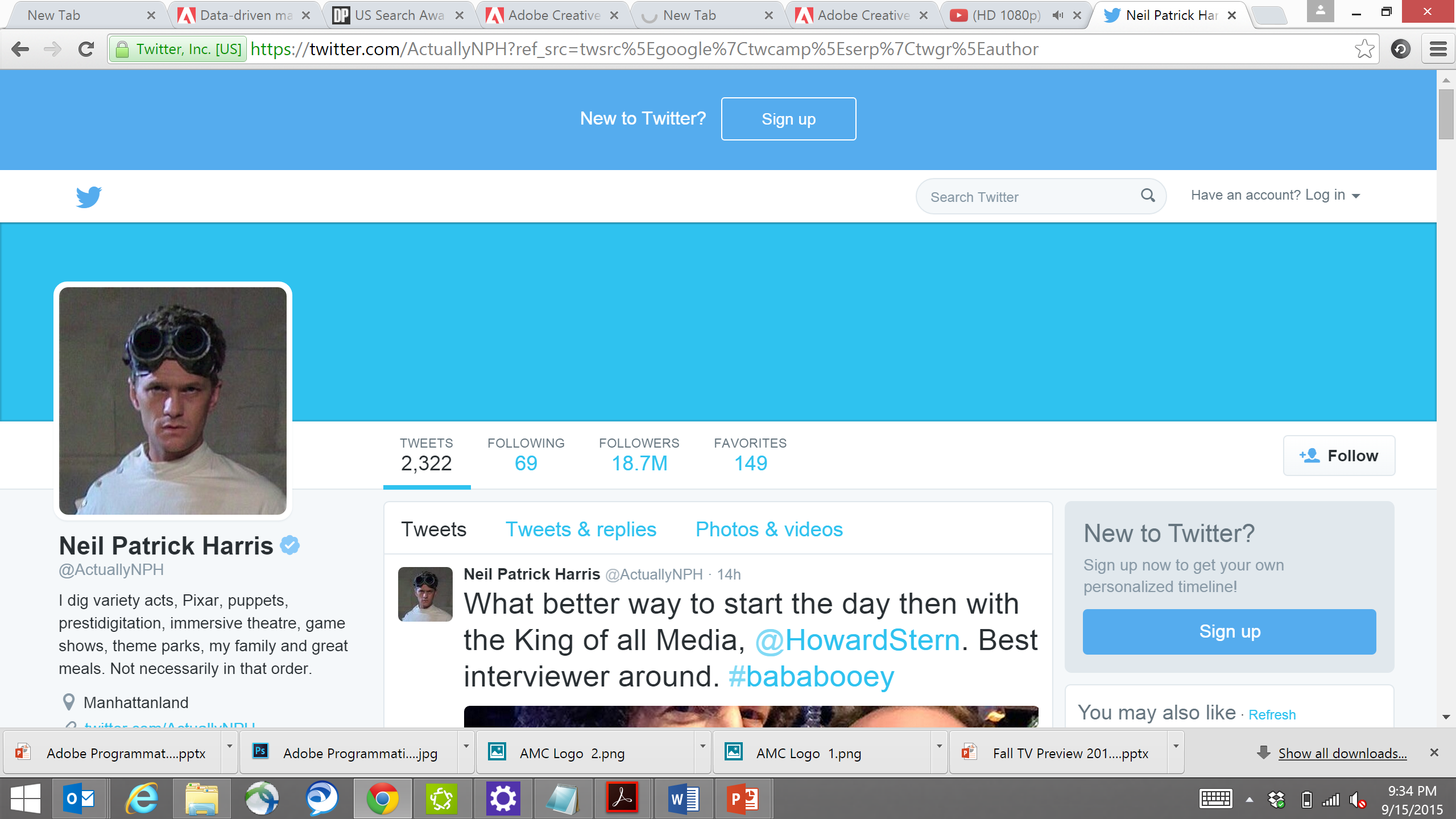 In recent weeks Neil Patrick Harris has started to heavily promote his show on Twitter and it has 5x more mentions over the last 3 weeks then it did all summer.

As the new fall shows kick off this week it will be up to Neil Patrick Harris (Best Time Ever), Priyanka Chopra (Quantico), Jamie Lee Curtis (Scream Queens), Kermit and Miss Piggy (The Muppets), Melissa Benoist (Supergirl), and Masi Oka (Heroes Reborn) to lead their shows to strong premieres.

“Scream Queens” leads the top 5 most buzzed about new shows. As of the end of the summer it had 130,000 + followers on Twitter, 320,000 fans on Facebook, and its YouTube trailer had received about 4.5 million views. It also picked up 500,000 + social mentions putting it head and shoulders above the competition.

Coming in second for social buzz is “Heroes Reborn,” on NBC, which has a combined Twitter and Facebook following of 6.7 million. The YouTube trailer for the show has also garnered 6.7 million views. In total, it has received 150,000 social mentions.

Rounding out the top five for social buzz: CBS’s “Supergirl” (150,000 social mentions), ABC’s “Quantico” (76,000), and ABC’s “The Muppets” (25,000), which has come on strong during September promotions and after the Kermit and Miss Piggy split was announced.

Strong social buzz heading into the premiere season gives any show a good chance at catching hold of a digitally available audience of Gen Z, millennials, Gen Xers and even the hipsters.

Why I Watch Commercials and Don’t Use an Online Ad Blocker
August 13, 2015

Amazon #Primeday was either the worst sale or the best branding stunt ever
July 17, 2015