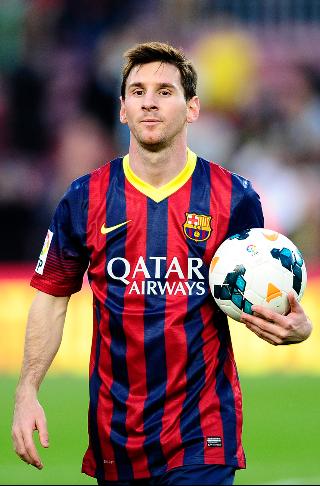 Its simple business, once you have a mature product you look to either expand the reach of the existing product or create a new product. Sports is no different. In a world filled with cord cutters, digital television, and endless content to compete with ESPN, the worldwide sports leader, has turned to one of the oldest sports around to enhance its portfolio of options for American sports fans.

Soccer has always struggled to fully catch hold in the United States against the likes of the NFL, MLB, NBA, and even Nascar. The MLS is continuing to grow, but is still seen as a minor league compared to the English Premier League or La Liga. ESPN saw this as an opportunity to expand its brand through a new/old sport and broadcasted every World Cup game on its family of networks last year. Fox Sports, who will broadcast the Champions League final this year, and NBC sports have also jumped on the continued ploy to push Soccer on Americans.

Some recent data I put together for Adobe Digital Index shows that the push for Soccer to grow in the states may finally be working. The growth in share of buzz from the United States for Champions League more than doubled since last year when ESPN led a charge to push soccer on American fans hungry for summer sports. 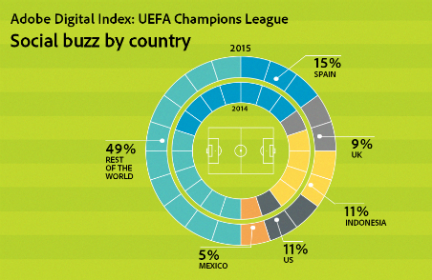 With soccer interest growing in the United States, how does a premier league like the NBA compare with its global growth? Every year the NBA playoffs go head to head with Champions League for global sports supremacy. According to a recent report I did for Adobe Digital Index, of the American sports, the NBA is definitely the most international with 39% of its social buzz coming from outside the United States. Of course the U.S. is not much of a soccer country, but on a global stage, few things can compete with Champions League or the World Cup.

When you look at just the athletes, soccer definitely dominate the global stage. Lionel Messi, the multiple time FIFA player of the year, has more than 3x the mentions that LeBron James has during a peak time of the year for both. 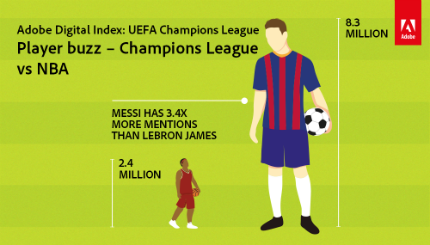 Going into the final for both Champions League and NBA playoffs, who is leading the battle for May and June sports supremacy, and has there been an improvement since last year? The buzz for Champions League 2015 is trending slightly higher than the NBA playoffs right now globally. Champions League also has 2x more mentions than it did in 2014, while the NBA is pretty much flat for buzz year over year. 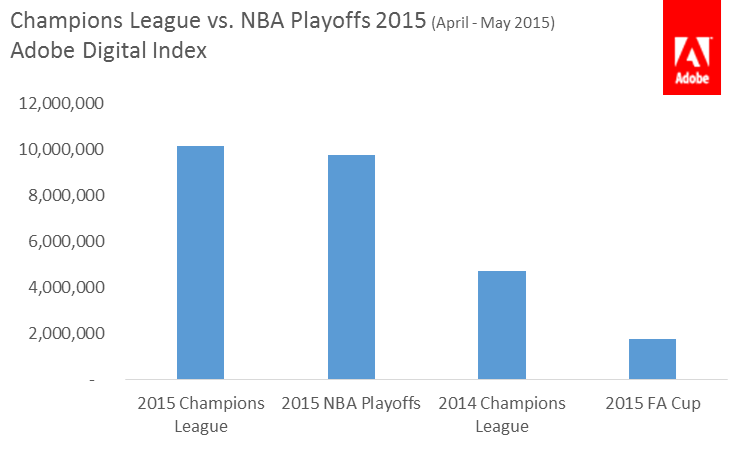 With Champions League leading the way, here are two storylines to keep an eye on.